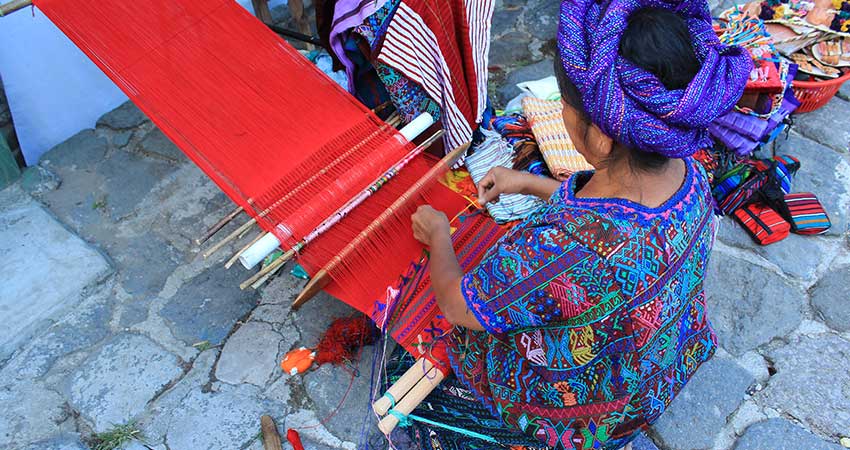 A collaborative endeavor of Dr. James Mondloch and the Latin American and Iberian Institute at the University of New Mexico, the K'iche' Maya Oral History Project contains 149 oral histories, which were collected in western Guatemala during the 1960s and 1970s. Now fully digitized, this collection of written and spoken K'iche' Maya is available to audiences worldwide. The project is made possible with funding from the LAII's US Department of Education Title VI National Resource Center grant.

In the decades since these stories were recorded and transcribed the speakers of the K’iche’ language have come under increasing pressure to integrate into the national Guatemalan culture and to use Spanish as their primary language. The online availability of this collection provides to those K’iche’s who are struggling to preserve their language and culture a unique source of material to assist them in their efforts.

The narratives in this collection also provide unique insights into the culture of the K’iche’ Maya including their history, social organization, values, beliefs, agricultural practices, and cosmo vision.  Those interested in studying the K’iche’ language will find the audio recordings of the narratives accompanied by their transcriptions a rich source of materials in the language.

The stories and rituals included in this collection were collected between 1968 and 1973. All of them are narrated in the K'iche' Maya language of Guatemala. Almost all of the narrators speak the Nahualá-Santa Catarina Ixtahuacán dialect of that language.

Almost all of the stories were tape-recorded by James Mondloch, PhD He lived and worked in the caserio of Pasaq, aldea Xejuyub', municipio of Nahualá, departamento de Sololá during the period 1966 - 1975. During that period Dr. Mondloch worked as a Catholic missionary in the area. Most of the stories were recorded in Pasaq and nearby caserios.

All of the transcriptions of the recordings were painstakingly typewritten over a period of several years by Miguel Guarchaj Ch'o'x, and Diego Guarchaj, both residents of the caserio Pasaq. The transcriptions were written in an alphabet developed in the 1950s by linguists from the Wycliff Bible Translators working in Guatemala. The Guatemalan government subsequently adopted this as the official alphabet for writing the K'iche', Kaqchikel, Tz'utujil, Qeqchi', and Mam Mayan languages of Guatemala. In 1985 the Guatemalan Ministerio de Educación adopted the alphabet of the Academia de Lenguas Mayas de Guatemala (ALMG) as the new official alphabet for writing Guatemalan Mayan languages.

For reference, see an alphabet comparison of how the written alphabet used in the stories compares with the alphabet of the ALMG.

The interlinear Spanish translations of the K'iche' texts were also done by Miguel Guarchaj and Diego Guarchaj. The handwritten edits found in some of the texts were added by the two transcribers when, upon review of their work, they discovered some of their transcriptions were not true to the oral versions of the stories.

Below is a video which was filmed around 1968 by James Mondloch, PhD. Most of this footage was filmed in the coastal regions of the municipio of Nahualá, Departamento de Sololá, Guatemala. Most of the people who appear in the films are K'iche' Maya, and speak the K'iche' Mayan language.

Dr. James Mondloch received his PhD in linguistics and anthropology from the State University of New York at Albany in 1981. In collaboration with colleague Dr. Robert Carmack, Mondloch has co-translated and annotated several 16th century K'iche' documents, including El Título de Totonicapán, El Título Yax, and El Título K'oyoy. In 1979 the Institute for Mesoamerican Studies at the State University of New York at Albany published his Basic Quiché Grammar. In 2017, Mondloch published Basic K'ichee' Grammar (University Press of Colorado), a guide for learning the K’iche’ language, Basic K'ichee' Grammar is a valuable resource for anyone seeking a speaking and reading knowledge of modern K’iche’, including linguists, anthropologists, and art historians, as well as non academics working in K’iche’ communities, such as physicians, dentists, community development workers, and educators. Most recently, he published a new translation and interpretation of the Popol Wuj (Universidad Mesoamericana) with colleague Robert Carmack.

Mondloch's wife of 35 years, María Tahay Carrillo, is a native K'iche' speaker from the municipio of Santa Catarina Ixtahuacán.